India is a land of diverse culture and traditions. Raksha Bandhan is one such festival that unites the country as it is celebrated across the country. Different regions and cultures have their unique ways to celebrate the festival of Raksha Bandhan.

Punjab is a land of five rivers. The Sanskrit name for the region as mentioned in the Ramanayana and the Mahabharata is Panchanada which translates as “land of the five rivers.”

The contemporary word Punjab is a compound word of two Persian words – panj and ab, meaning five and waters, respectively. This Persian word is the consequence of Muslim invasion of the region.

These five rivers of the region include the Sutlej, Beas, Ravi, Chenab, and Jehlum also written as Jhelum.

The northern state of India – Punjab celebrates many festivals such as Lohri, Basant, Vaisakhi, and Teeyan, along with Raksha Bandhan. In some sikh texts, there is a disregard for the festival of Raksha Bandhan. They consider it as a Hindu festival which is not aligned with the Sikh faith.

However, the festival is indeed celebrated by the Sikhs of the region too. A scholar of Sikhism, Eleanor Nesbitt in her book, “Sikhism: A Very Short Introduction” writes that many contemporary Sikhs “observe the annual bonding of brothers and sisters on the day of Rakhi (Raksha Bandhan).”

In Punjab, Raksha bandhan is also called Rakhi, Rakhri, and Raksha Purnima. In various historic Sikh texts, the festival is mentioned as Rakhardi or Rakhari. It is celebrated as Rakhrhya which is the Punjabi name of the festival of Raksha Bandhan.

The word rakhi in the Punjabi language dates back to the 18th century when the Sikh Khalsa Army introduced the term ‘Rakhi’. The army promised the farmers of the land to protect them from the Mughal and Afghan armies, and in exchange of that protection, demanded a small share in their produce.

Hence, originally, it was a bond between groups of people to protect each other’s well-being. That bond eventually turned into the bond between brothers and sisters which we now call Raksha Bandhan.

The founder of the Sikh empire, Maharaja Ranjit Singh, and his wife Maharani Jindan Kaur celebrated the festival of Raksha Bandhan. Maharani Jindan exactly knew the importance and the sacredness of the rakhi.

Photo :- Maharani Jindan Kaur (wikimedia)
Keeping her faith intact in the rakhi, she sent a rakhi to the King of Nepal. The King of Nepal graciously accepted her as his sister. And, when the Sikh Empire collapsed totally, he gave Maharani Jindan refuge in the Hindu kingdom of Nepal like a true brother, honoring the vows of protection to his sister.

The state of Punjab is a culturally rich region with its own music; poetry in the Punjabi language; Punjabi film industry that has been thriving even before the partition; wide range of Punjabi cuisine, and seasonal festivals based on the cycle of the Nature. Raksha Bandhan observed on the full moon day of the Hindu month of Shravana has a very important cultural dimension to it.

An annual fair called Rakhar Punya is held at Baba Bakala in the district of Amritsar on the occasion of Raksha Bandhan. This fair has a connection with an important event in the history of the Sikh faith.

It is at this holy shrine at Baba Bakala that the famous trader Makhan Shah Lubana declared from the rooftop that he had finally found the true Guru. Guru Harkrishn while on his deathbed in Delhi clumsily uttered “Baba Bakale”.

The Sikhs of the time interpreted that the Guru had predicted that his successor would be found in Baba Bakale which was earlier known as Bakkan-Wala.

The actual ceremony of Raksha Bandhan is mostly the same in Punjab too. The best thing of tying rakhi around the wrist of the brother is its simplicity and minimalistic appeal. The house is all shiny and bright.

If the sister is married, her arrival at the brother’s home is awaited eagerly. If brothers and sisters are living together, all come together in all their colourful clothes and fine jewellery.

The sister prepares pooja thali with roli, chawal, rakhi, fresh sweets, and aarati. She applies roli, chawal on the forehead of the brother, performs aarati, and ties rakhi around the right wrist of the brother.

She prays for the safety and well-being of her brother and his family. Brothers and sisters exchange traditional Punjabi sweets like khajuri; dodha barfi; besan ki barfi; peanut chikki; pinni, and many more.

Brother then gives his sister gifts and promises to protect her throughout the life. Depending upon the customs of the families, the sister also ties rakhis to sister-in-law, nephew and niece.

After the completion of this actual ceremony, it is time for fun, food, and songs.

The people of Punjab are known as foodies across the world. Their food is rich with ghee, dry fruits, and curd. It is one of the reasons why they have sturdy and bigger physique. Can a culture which is quite a foodie in normal life lack in pure indulgence on the day of any festival, especially Raksha Bandhan? The answer is obvious no.

The non-vegetarian delicacies include butter chicken; tandoori chicken; machchli amritsari; murgh, Bhatti da Murg Pindiwala, and many others. Accompaniments include gobhi-shalgam-gajar pickle; Patiala lassi; amritsari lassi, and other delicacies made of curd.

Families also get together and sing Raksha Bandhan special songs.

As the festival is imminent; the shops in all the cities of the state of Punjab are all decked up with colourful vibrant rakhis. Punjabis are enthusiastic, energetic, passionate, and fun-loving lot.

With the equal fervour and zeal, brothers too are out on the streets with their wives, purchasing the best gifts for their sisters. They want nothing but the best for their beloved sisters.

The enthusiasm and the excitement of their customers naturally get into the shopkeepers too. They are more than willing to present to them variety of rakhis and gifts for their dear siblings.

This vibe of joy, excitement, and pleasure may have been dampened a bit due to the COVID-19, but these sentiments are still at the heart of the festival of Raksha Bandhan. The online rakhi portals such as Babla Rakhi give you the same feel and vibe when you want to send rakhi to your brother online. Read Babla Rakhi blog post on: “How to Send Rakhi to Your Brother Online.”

When it comes to sending rakhi to brothers no matter what the rakhi costs, Punjabi NRI sisters are second to none. In fact, Babla Rakhi takes immense pride in having a Punjabi sister from the USA as its first customer in the year of 2012.

The NRI Punjabi sisters are settled mostly in the countries like Canada; the USA; the UK; and Bangkok, Thailand. But, no matter for how long they have migrated to these foreign lands, they make sure that their rakhis and sweets reach their brothers, irrespective of circumstances or boundaries.

The NRI Punjabi sisters want nothing but the best for their brothers. While placing their orders with Babla Rakhi, these NRI Punjabi sisters always insist that they want the best of the dry fruits and sweets for their brothers. They do not think twice about the prices as they know that Babla Rakhi not just meets but always exceeds their expectations.

We have also seen that if the NRI Punjabi sisters have more than one brother in their Pind – the Punjabi word for the hometown, or for that matter brothers in any part of the world, they would send rakhi and rakhi gift hamper with premium quality sweets to each and every brother individually, irrespective of the costs of the rakhis and sweets.

And when their rakhi reaches their brothers, they never hesitate to show their joy and pride. They love to indulge in the public display of affection for their brothers. They also like to flaunt the rakhis and the sweets that they have sent to their brothers. Babla Rakhi considers this joy, affection and pride of its NRI Punjabi sisters as its true reward. Customers such as these NRI Punjabi sisters live our mantra: “Bonds matter, boundaries don’t” in its truest sense.

Babla Rakhi has over four decades of experience in the manufacturing, designing, and distribution of all types of rakhis. We have over 1000 rakhis for you to explore, and send rakhi to Punjab where your brothers live.

Our online rakhi delivery service is available in almost all the major cities of this state of Punjab. Do not overthink. Choose Babla Rakhi as your online partner to send rakhi to Chandigarh, Mohali, Ludhiana, Amritsar, Patiala, Jalandhar, Hoshiarpur, Batala, Pathankot, Firozpur, Phagwara

Do spread the word and share our portal www.bablarakhi.com with other sisters across the world. Let them too have the best online rakhi delivery experience that brings smile on brother’s face.

What is the historical significance of Raksha Bandhan in Punjab?

The Sikh Khalsa Army introduced the term ‘Rakhi’ and promised the farmers of the land to protect them from the Mughal and Afghan armies. For more information on this, read the section: Historical significance of Raksha Bandhan in Punjab

What is the cultural significance of Raksha Bandhan in Punjab?

An annual fair called Rakhar Punya is held at Baba Bakala in the district of Amritsar on the occasion of Raksha Bandhan. For more information on this, read our section: Cultural significance of Raksha Bandhan in Punjab.

Do the Sikhs celebrate Raksha Bandhan?

Yes. They do, in spite of some contrary views in their religion. For more information on this, read our section: Raksha Bandhan in Punjab.

What types of Rakhis do the Punjabi brothers like?

They like the bigger rakhis that match their bigger physiques. For more information on this, read our section: Festive vibe.

What are the rakhi special Panjabi sweets and food dishes?

They can range from bathua and sarso saag; dhaba dal; paneer tikka; chole bhature; shahi paneer to gulab jamun; shahi tukda; gajar ka halwa; doodhi ka halwa and so many more. For more information on this, read our section: Fun, food, and songs.

Find this blog interesting? Share it with your family, and friends.

You can also share it with children to let them have a learning-with-fun experience.

If you want to send rakhi to your brother online, and you need some help to place an online order, we are happy to help you.

END_OF_DOCUMENT_TOKEN_TO_BE_REPLACED

How to Send Rakhi to Indian Army Soldiers? 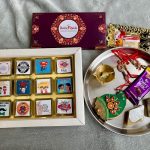 Make Your Brother Happy – Send Rakhi to India and Surprise Him!

Hurry! It is Raksha Bandhan! Place your Rakhi Orders Now!