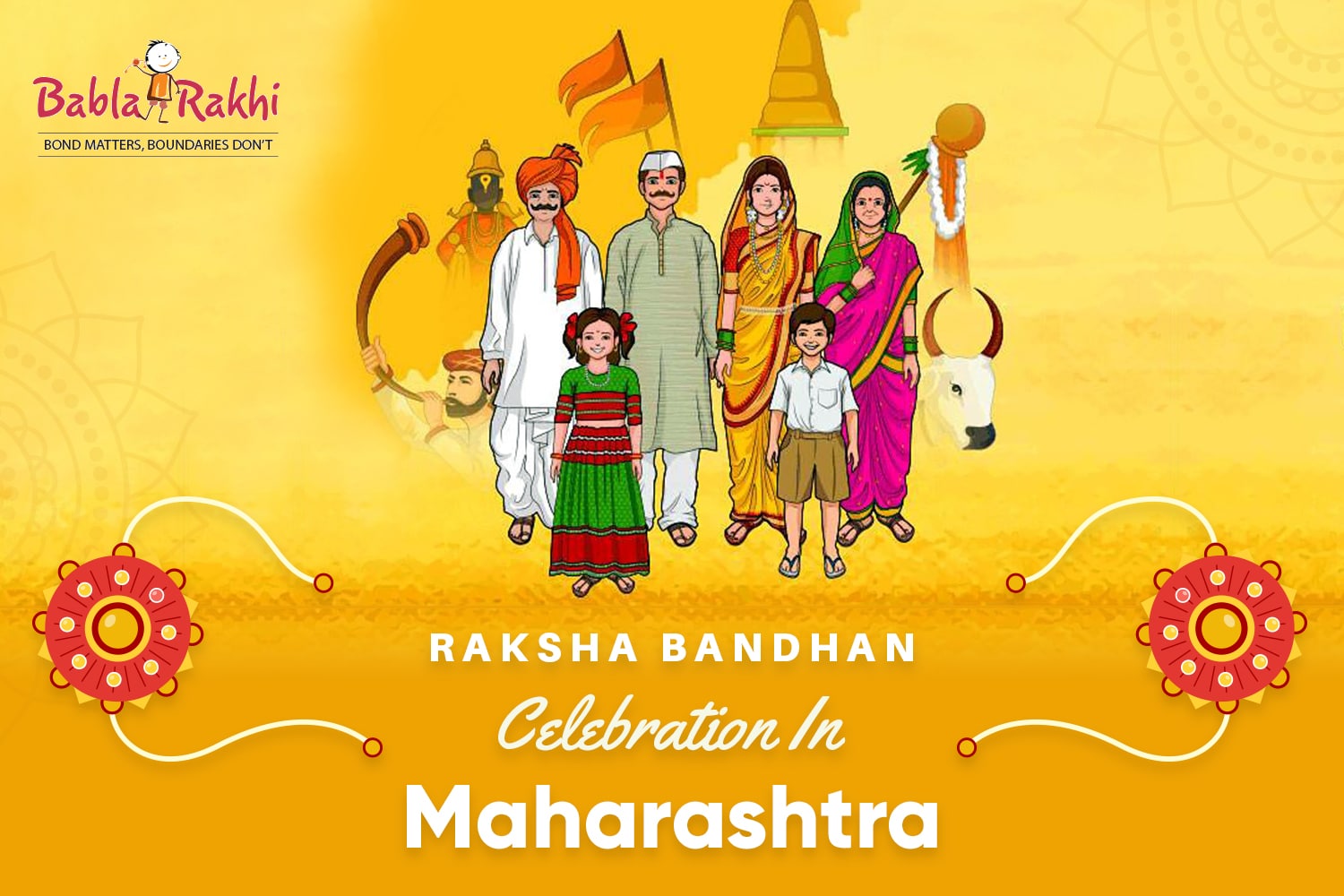 All of these explorations point to only one fact— unity in diversity—a way of life that India has been living since time immemorial. When you want to send rakhi to India, all these explorations connect you more deeply to the country, to the culture, and to its people.

Knowing the rich cultural heritage of the country where the festival of Raksha Bandhan finds its roots is an enriching inner experience. Let us then venture into one more exploration of this kind, and see how Maharashtra, the western state of India celebrates Raksha Bandhan.

Maharashtra is a western coastal state of India. Hence, Raksha Bandhan celebrations in this state predominantly revolve around the sea. The Koli community of the coastal regions of the state observes this day of the full moon of the Hindu month of Shravana as Nariyal Purnima whereas the urban areas of the state celebrate it with typical rakhi tying ceremony; exchanges of gifts; vows of protection; fun and food; and lot of laughter and joy.

When you want to send rakhi to India, it would be interesting to know the subtle nuances of this festival also known as Nariyal Purnima in India’s coastal state of Maharashtra.

The word nariyal means coconut. The Koli community in the coastal regions of Maharashtra offers coconut to the sea on the full moon day of the Hindu month of Shravana, hence, this day is also called Nariyal Purnima.

This festival is also called Shravani Purnima or Rakhi Purnima in this part of the world. This day is the end of monsoon season and the beginning of water-trade for fishing community.

During the rainy season when there is no fishing, fishermen community does not consume fish. But, when the rainy season ends on this day of full moon, they start eating fish by throwing coconut into the sea.

Throwing of coconut into the sea is a ritual to calm the hitherto intense sea. The coconut is thrown when the sea has high tide and heavy motion during the day. The choice of the coconut too finds its origins in the Hindu belief that coconut is an auspicious offering to the Hindu gods.

Coconut is considered auspicious because no part of it is useless. Coconut tree’s leaves, bark, coconut is of supreme use to human race. Also, coconut is perceived to have three eyes, and therefore, is believed to be an embodiment of the Lord Shiva.

These are some of the reasons that coconut is offered to the sea-God before fishing and water-trade season commences. Fishing community worships the sea-god Varuna and offer prayers to the sea.

They pray to the Lord Varuna that their trade runs absolutely smoothly throughout the year. They also seek blessings from the lord to protect them from any mishap during the year.

The prayers and offerings are often followed by dancing, singing, and eating together. They cook their traditional food such as naraali bhaat or coconut rice, narlachi karanjis which is sweet coconut stuffed bread, etc.

It is interesting to know how this community prepares to welcome their most important day.

On the actual day of the festival, fishermen worship the sea-God Varuna after throwing the coconut into the sea. They perform poojas to the boats; light small oil lamps, and set them afloat in the sea. They distribute coconut and coconut water as ‘prasad’ to the entire community.

In spite of all these variations, the underlying sentiment of protection and care for fellow human beings remains the same! And, it is this aspect of the festival of Raksha Bandhan that makes it truly pan-cultural festival.

The celebration of Raksha Bandhan in cities of Mumbai, Pune, Aurangabad, Nashik, Nagpur, and in many others is about sisters tying rakhi to brothers.

The actual ceremony of rakhi tying starts with all the siblings getting together in their finest clothes, jewellery, and other accessories, along with joy in their heart. The sisters prepare beautiful pooja thali which has roli-chawal, rakhi, and aarati.

If a sister is married woman, her arrival at the brother’s home is awaited eagerly, and if both the brothers and sisters are living together, they just come together and the sister applies kumum or kanku or roli on the forehead of her brother.

Brothers give their sisters beautiful gifts and promise to protect them and stand by them through the thick and thin.

The entire ceremony brings calm and joy to each heart. It is this day of the year that gives each heart a reason to stay connected throughout life no matter what the circumstances are.

Marathi culture embraces tradition more than any other part of the country. These are the people who have nurtured and celebrated their Marathi identity in all the spheres of life such as art, culture, food, music, cinema, and rituals. No wonder then, you will find traditional Marathi cuisine calling the shots in almost all the households on the day of Raksha Bandhan.

All the major cities of Maharashtra have their own unique delicacies too. For example, Mumbai has its own Vada Pav or Misal Pav or Pau Bhaji. Pune too is known of two kinds of Misal Pav. Kolhapur too is known for its unique Misal Pav.

Marathi culture has its unique sense of music and rhythm. When the siblings get together, they sing traditional Marathi songs to celebrate the bond between brothers and sisters!

Festive vibes in the air

Maharashtra often means Mumbai. But, Maharashtra is much more than just glamorous and rich Mumbai. There are so many unique cities and coastal areas in Maharashtra that too celebrate Raksha Bandhan in style!

Each and every part of Maharashtra gears up for the celebration of Raksha Bandhan, and not just Mumbai. No matter where you go, you will find colourful, attractive rakhis hanging in the shops in any part of the state.

There is an aroma of traditional sweets, especially the sweets made from coconut, in the air. All the sisters are out on the street to buy the best rakhi for their brothers. All the brothers are searching for the best gifts for their dear sisters.

The liveliness is infectious. It is as if it is siblings have been eagerly waiting for this festival, and now they want to do their best to make this festival memorable!

In the era of social distancing, it is best to send rakhi to India from Babla Rakhi. We are the best portal to buy rakhi on. You can send rakhi to Mumbai, Pune, Aurangabad, Nashik, Nagpur or any of the cities of Maharashtra through Babla Rakhi.

Our online rakhi delivery service in Mumbai and other cities of Maharashtra would bring your rakhi gift hamper to your brother’s doorstep within 3-4 working days. We also offer free shipping in India.

Our experience of four decades in rakhi business makes us the best rakhi vendor in India. We have vast collection of over 1500 rakhis. You can choose rakhi that is most suitable for your brother. Our blog post: How to Send Rakhi to Your Brother Online discusses this thoroughly.

Let Babla Rakhi be your trusted online partner when you want to send rakhi to India or send rakhi to Mumbai, Pune, Aurangabad, Nashik or Nagpur.

Why Raksha Bandhan is called Nariyal Purnima in Maharashtra?

Marathi people love to cook any coconut-based delicacy on the occasion of Raksha Bandhan. Some delicacies include narali bhat; nariyal barfi; suji and coconut ladoo among others. For more information on this, read this post’s section: Fun, food, and songs.

Why coconut is offered to the sea-god on Nariyal Purnima?

There is no part of the coconut that is not useful to humans. Its offering therefore pleases the lord. It is also believed to have three eyes which makes it an embodiment of the Lord Shiva. Hence, fishing community offers coconut to the sea-god on Nariyal Purnima. For more information on this, read this post’s section: Nariyal Purnima in Maharashtra.

Humans need a reference to be. Mythology is just one of the ways to satiate this fundamental human need for reference. Every culture and every tradition love to have a…